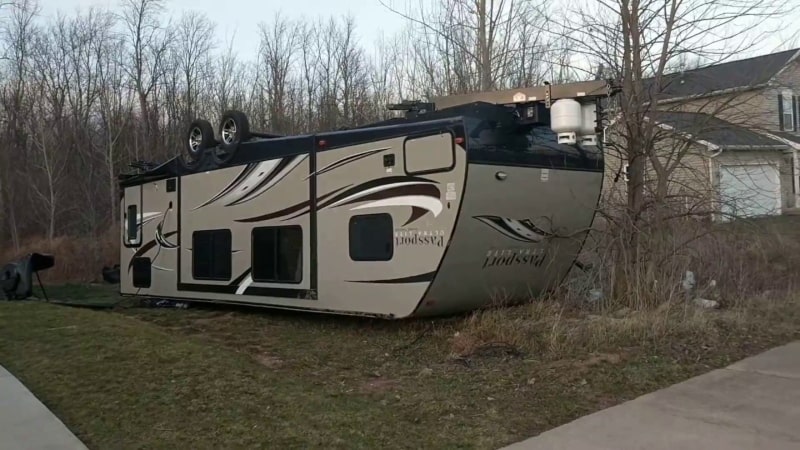 Knowing your camper can tip over when parked is a scary thought. Tipping over on the road is often the result of unsafe driving practices or a poorly balanced trailer. But what about when your camper tips over when it’s parked?

In rare cases, a camper can tip over when parked. Let’s look at the causes of parked campers tipping over and what you can do to avoid it.

How Likely Is It for a Camper to Tip Over When Parked?

It’s a scary thought, but thankfully, it’s not very likely for a camper to tip over when parked. Generally, this only happens due to extremely high winds pushing on the side of the camper. A minimum wind speed of around 60 mph would be required to tip a trailer. Many campers will withstand winds up to 180 mph.

There are a few different things that could cause a camper to flip. Here are the 5 top reasons.

The main cause of a camper tipping over when parked is extremely high winds. If high winds hit your camper from the side, it can push your camper over, even if you’re in motion on the highway.

If you park your camper and don’t properly level it, it will be more prone to tipping over. A trailer that’s not level is unbalanced and easier to knock over.

Jackknifing occurs when your trailer or towed RV pulls too far to the side. This can happen due to equipment failure or improper breaking. One of the most common causes is adverse road conditions, such as ice. If the trailer jackknifes with enough force, it can cause your camper to flip.

Trailer sway occurs when your trailer moves from side to side while driving. This is predominantly caused by improper weight distribution. With enough force, trailer sway can tip over your camper with ease.

Driving too fast is always dangerous, but it’s hazardous for top-heavy vehicles like campers. Your camper can easily tip over if you don’t slow down sufficiently when making sudden maneuvers such as lane changes, turns, or stopping.

Are Campers More Likely to Tip Over in Certain Locations?

Your camper is most likely to tip over in windier areas. The flattest parts of the country, particularly the Great Plains, are highly prone to high wind conditions. With little to nothing to slow the wind down, it can much more easily reach dangerous speeds in these areas.

What Wind Speed Will Tip Over a Parked Camper?

Wind speeds over 60 mph can tip a camper over, but many campers will still withstand these speeds with the proper precautions. However, if wind speeds get up over 150 mph, tipping becomes much more likely.

What Wind Speed Will Flip a Camper in Motion?

When in motion, high wind speeds become much more dangerous. It will still take relatively high winds to tip over a camper in motion. But even 35 mph winds can make driving hazardous, and at speeds over 100 mph, tipping over becomes a much greater possibility.

How to Measure Wind Speed

Wind speed is measured using a device called an “anemometer.” This consists of four arms with a cup at the end of each arm, which catches the wind and rotates. The rotation is measured to give the wind speed.

You can make your own anemometer and use it to measure wind speed. But if you need to measure the wind speed, you’re better off searching current weather conditions online or checking a forecast.

Should You Tie Down Your Camper Before Leaving the Campsite?

In most cases, it’s unnecessary to tie your camper down before leaving the campsite. But if extremely high winds are expected, you should tie your trailer down before going anywhere.

Which RV Is Most Likely to Flip?

Out of all RVs, the most likely to flip are Class A motorhomes. This is due to their large size and square shape. All of this sidewall surface area for the wind to push against makes these campers tip over when parked more of a possibility.

Fifth wheels are another category of camper that tips over when parked more than average. Those that sit high off the ground are susceptible to flipping.

In high wind conditions, pull in your slideouts, lower your stabilizer jacks to decrease your ground clearance, and hitch up to your tow vehicle. The extra weight of your truck can keep the RV from flipping over.

What Factors Make Your RV More Likely to Flip?

The biggest factors that make your RV more likely to flip are its size and shape. Size is self-explanatory: the bigger your RV, the more surface area the wind pushes against. This is why high wind speeds are a much greater risk for RVs than a sedan.

Shape matters because the flatter the RV is on the side where it’s hit by the wind, the more likely it is to flip because the air cannot easily move around it.

Lighter RVs can also be more prone to flipping because they don’t have enough weight to withstand high wind speeds.

A few main signs tell you your camper might tip over when parked.

The main, and most important sign, is if the camper is severely off-level. Noticeable inclines and your travel trailer being off-balance is the perfect recipe for your camper to tip over.

If you can feel your camper moving around while inside, you’re also at greater risk of tipping over.

8 Ways to Prevent Your Camper Tipping Over When Parked

Your camper tipping over while parked isn’t common, but it can happen. Here are 8 ways you can prevent it from happening.

Extended awnings and slides make your camper more prone to tipping over because they move your camper’s center of gravity. They also give something for high winds to catch. Keep both retracted when not in use.

2. Park to Avoid Side Winds

Strong winds pushing against the side of your camper are the main cause for it tipping over. Park your camper, so it faces the prevailing wind direction, or park it somewhere it will be protected from side winds.

If wind speeds are expected to get especially high, consider securing your camper with tie-downs. This will give your camper extra stability and make it harder for the wind to tip it over.

5. Balance the Weight in Your Camper

When your camper is unevenly weighted, it’s more likely to tip over toward its heaviest side. By evening out the weight distribution inside, you can reduce the chance of it tipping over.

6. Use Tools to Understand Wind Speed

You can buy an anemometer or build a simple one to measure local wind speed accurately. Devices such as windsocks can show the wind’s direction, and a barometer to measure air pressure also affects wind speeds.

Speaking of local forecasts, if you see any major weather warnings in the forecast, you should heed them. If strong winds are predicted, prepare to protect yourself from your camper tipping over.

For better protection, add your window radiant insulation against your windows. This will protect your RV from window shards blowing in if they break.

What to Do If Your RV Tips

If your RV tips over, your first order of business is to get yourself and everybody else out of it. During a storm, there could still be severe winds outside; you should try and seek shelter elsewhere, preferably inside a fixed structure.

Once everyone’s safe, your next step is to call emergency services to report what happened. You should also carefully document everything with photos and videos and contact your insurance company after the storm.

Other Things to Consider When Parking in High Winds

When parking in high winds, there are a few other things to consider to keep yourself safe.

The first consideration is to avoid parking in a large, open area. Large open spaces are the perfect place for wind speeds to get faster and tip over your trailer.

On the flip side, avoid parking directly under any trees. High winds can easily knock trees over, which then fall onto your RV and cause severe damage.

The ideal place to park in high winds is next to anything that can work as a windbreak. Examples include parking on the low side of a hill or next to a building.

One final tip for owners of towable RVs is to keep the RV hitched to your tow vehicle when parking in high winds. This provides greater stability and makes it much harder for the wind to knock over your RV.

Final Thoughts on Can a Camper Tip Over When Parked

As we’ve seen, a camper tipping over while parked isn’t likely, but it’s possible. The primary cause of parked campers tipping is strong winds hitting the side of the camper.

To prevent tipping over, keep an eye on the weather and consider tie-downs if things get serious. Be sure to retract slide-outs and awnings when the wind picks up, keep your stabilizing jacks down, and balance the weight as best as possible.

Follow these tips, and you won’t have to worry about your camper tipping over when parked.

Jennifer Jennings is a full-time RVer and part-time van lifer. She is one half of DashboardDrifters.com and the founder of RVSpotDrop, a web service for full-time RVers.

A travel trailer under 20 feet is often the sweet spot of recreational vehicles. They’re best for those who don’t have kids and don’t have to go through the dreaded annual visits from the...

If you’re thinking about purchasing an Alpha Wolf by Cherokee or a Classic Airstream and you’re rocking a Toyota Prius with a brand new after-market hitch, prepare to be frustrated. You’d have...

Hi, we are Mike and Susan Scarpignato, and we started Travel Trailer Pro to share everything we have learned about camping with a travel trailer.

This site is a participant in the Amazon Services LLC Associates Program, an affiliate advertising program designed to provide a means for sites to earn advertising fees by advertising and linking to Amazon.com. We are compensated for referring traffic and business to Amazon and other companies linked to on this site.